ADSR (Attack Decay Sustain Release) envelopes provide a way to specify how sound synthesis parameters such as filter cutoff and gain change over time. They support the synthesis of evolving timbres and are commonly found in analog synthesizers where the envelopes are triggered by pressing keys on the keyboard.

With three ADSR envelope generators, AudioMulch's SouthPole contraption provides plenty of scope for envelope controlled filter modulation. In this post I'll demonstrate triggering the envelopes from their built-in pattern sequencers to create rhythmic patterns of filtering and gating. I'll use this functionality to synthesize some basic drum sounds and later to filter and gate samples.

Before reading on you might want to review my previous posts exploring AudioMulch's SouthPole contraption: In part 1 I introduced the basic structure of SouthPole. Then Last time I showed how the modulation mixer can be used to mix different modulation sources together to create time varying filtering.

(If you already know what an ADSR envelope is you might want to skip down to the "ADSR enveloped filter examples -- Drums" section, but on your way past take a look at the diagrams to pick up a few insights into how SouthPole's envelope generators are wired in to the modulation mixer.)

ADSR (Attack Decay Sustain Release) envelopes are a common way to specify how sound synthesis parameters evolve over time. ADSR envelopes are simple compared to the complex envelopes of some natural sounds (waterfalls, bowed strings), and they don't offer the flexibility of AudioMulch's automation curves, but for percussive sounds and analogue synth sounds they're just the ticket. SouthPole's ADSR envelopes can be used to sweep filter cutoff, resonance and/or gain.

The diagram below shows how an ADSR envelope evolves over time. 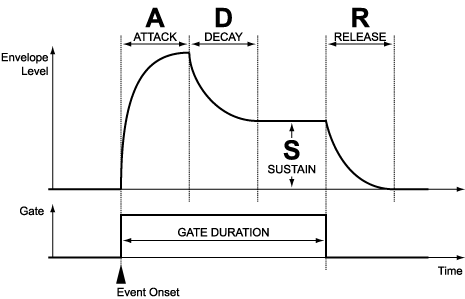 When the envelope is triggered it sweeps to its maximum value over the Attack period, then decays to the Sustain level over the Decay period, then as the note ends the envelope returns to zero during the Release period. Note that the Attack, Decay and Release parameters are time parameters - they control the duration of their corresponding envelope segments, while the Sustain parameter controls the steady-state level that the decay segment arrives at.

SouthPole controls the timing of its envelopes using a gate (shown underneath the ADSR envelope on the diagram). The gate opens when an event starts (triggering the Attack), and closes (initiating the Release) at some later time. If the envelope was controlled by a keyboard (which it isn't in SouthPole) the gate would open when a key was pressed and close when the key was released. SouthPole provides a Gate Duration setting which determines how long the gate is open for, and thus when release starts. The Gate Duration is relative to tempo. The gate may be triggered by a pattern or an external input. In this post I'm sticking with the default pattern triggered mode where, like in some other AudioMulch contraptions, you specify a rhythmic pattern on a grid.

SouthPole's envelopes integrate with its modulation mixer in the same way as the LFOs I discussed last time. Their values are summed with the level of the Base parameter value and any other modulation sources according to the mix levels in the modulation mixer. 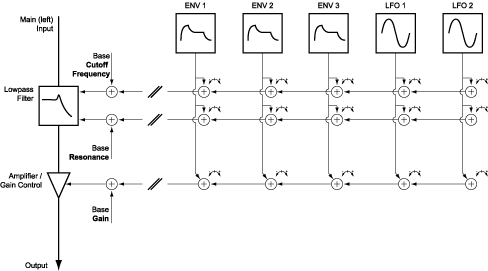 When a single envelope is used to modify, say, the filter cutoff, the Base parameter value sets the level at which the envelope starts its attack and ends its release, and the envelope modulation mixer level controls how far the attack sweeps at its highest (or lowest) point before the release begins. This also affects the scaling of the Sustain level. For a positive (clockwise) envelope amount, the evolution of the filter cutoff looks like this: 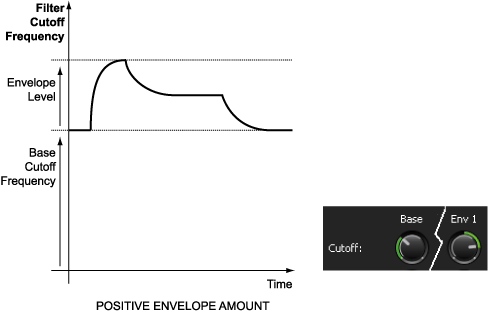 Here's what that sounds like when filtering some white noise (the envelope is triggered 4 times):

I've made the envelope quite slow so you should be able to hear it sweep up from its Base level, then down to the Sustain level, and finally back to the Base level again during the release stage. (Actually the knob settings aren't quite the same as in the graph above, they are: Base cutoff 153 Hz and Env 1 amount 0.197)

If the modulation amount is negative (the envelope modulation mix level is turned counter-clockwise) then the filter sweeps downwards below the Base cutoff frequency: 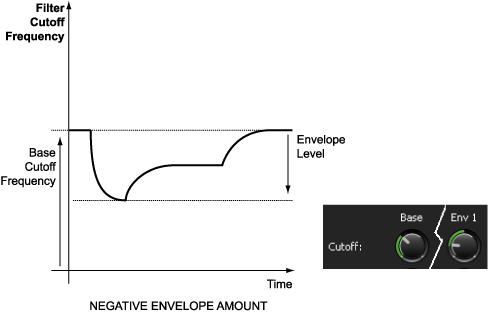 I could go on and show you how an envelope controlled filter would sound with a short attack, a fast release, a fast gate duration or varying the sustain level, or any combination of these, but the best way to get to know how the different ADSR envelope parameters affect the sound is to play with the parameters yourself. Here's a few rules of thumb to get your tweaking started:

A fast Attack time will give a punchy percussive attack. When you are modulating the filter cutoff with lots of resonance this can become a hard clicking (I use that in the kick drum synthesis example later). The Sustain level and the envelope modulation level effectively control the brightness (for cutoff frequency modulation) or loudness (for gain modulation) of the sound. If you set Sustain to zero you have an A-R envelope with the Decay parameter functioning as the release time. Short release times (especially when modulating Gain) give an abrupt end to notes, whereas a long release time can give notes a “ringing” decay which sounds like a resonant object ringing out – ringing amplitude decays was one feature of the fizzy Vince Clark/Depeche Mode synth sound in the 80s.

To get a classic analog synth filter modulation sound with SouthPole you'd usually set the base Gain and Filter Cutoff to zero (or a low value) and then modulate these with an envelope. Keep in mind that many common synth sounds use separate envelopes for filter cutoff and amplitude. Modulating resonance with an envelope is less common, but whatever resonance setting you use will usually make a big difference to the sound when an envelope is controlling the cutoff frequency.

My last two posts focused on making melodic synth sounds with SouthPole. Today I'm going to filter noise and make some synthetic drum sounds: hi hats and kick drums. Both depend on quickly sweeping filter and amplitude envelopes to create short percussive sounds with a sharp attack and a slower release time. Here's the end result:

The patch for the high-hat synthesis involves filtering white noise from a TestGen with a parameteric equaliser, then using the SouthPole to add extra filtering and amplitude enveloping:

The parametric equaliser filters out all of the low frequencies before they get to the SouthPole, then I used two envelope generators, Envelope 1 for the closed high hat sound, and Envelope 2 for the open high hat. The envelope generator's built-in pattern sequencers create rhythmic triggering of the envelope patterns:

As you can see, the Base filter cutoff is set quite high, so the main function of the SouthPole is to gate the white noise coming from the MParaEQ which handles most of the filtering.

The kick drum sound was made with a similar filtered noise technique. In this case the filter cutoff is ramped quickly from high-to low and its actually the filter's resonance which makes the main sound of the kick drum. Heard alone it sounds like this:

I used separate envelopes for the filter cutoff and gain. This lets me control the ringing of the kick drum using the gain envelope without affecting the tuning (controlled by the filter envelope).

Listening to the sound example above you'll notice that each kick drum hit sounds different. This is because I'm feeding the SouthPole with filtered noise. Switching the TestGen to output a low frequency (91 Hz) sine wave gives a more consistent result:

If you want to explore this further you'll find the link to download the AudioMulch document below, so read on...

Synthesizing drum sounds using filtered noise is great if you want that classic 70's synth drum sound but thanks to the wonders of modern technology you can also process other sounds through SouthPole. In the example below I've sequenced five different percussion samples and an electric guitar sample using a Drums contraption, and filtered these through a SouthPole contraption using variations of the high hat filter settings I described above. I've used the Metasurface to move between various parameter settings of the equalisers and SouthPole and also to fade in white noise for the original high hat sound. Similar modulations were applied for the kick drum.

You can download both the high-hat plus Drums patch and the Metasurface percussion filtering patches here. I recommend tweaking the ADSR envelope settings, gate duration and modulation amounts in the SouthPole modulation mixers to see what other filterings you can come up with. In the sample processing example there's plenty of scope for substituting different samples, sequencing different rhythmic patterns in the SouthPoles and messing with the Metasurface.

Originally I was planning to cover SouthPole's envelope trigger modes today.. but I seem to have covered enough ground for this episode, that will have to wait for next time. If you have any questions about this, or my other blog posts, please feel free to ask a question in the forums. Thanks for reading. Until next time -- Happy Mulching!