In part 1 of this series about AudioMulch's SouthPole contraption I presented the basics of resonant lowpass filtering. I gave an example of using AudioMulch's automation system to create rhythmic patterns of filtering by automating SouthPole's Base Frequency, Resonance and Gain. If you haven't read it you might want to check out part 1 here. This week's post picks up the story with an explanation of SouthPole's modulation mixing system. Then we'll look at some examples using SouthPole's LFOs (low frequency oscillators) to create various types of time-varying filtering. 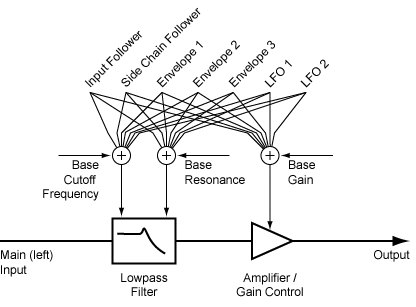 A diagram showing the routing of all modulation sources to each basic SouthPole parameter.

The diagram lists 7 different modulation sources (Input Follower, Side Chain Follower, Envelope generators 1, 2 and 3, low frequency oscillators (LFOs)1 and 2. Each of these 7 sources is routed to all three basic parameters (cutoff, resonance, and gain). For each parameter the “Base” parameter value provides (you guessed it) a base value to which all of the modulation sources are summed (added or subtracted). 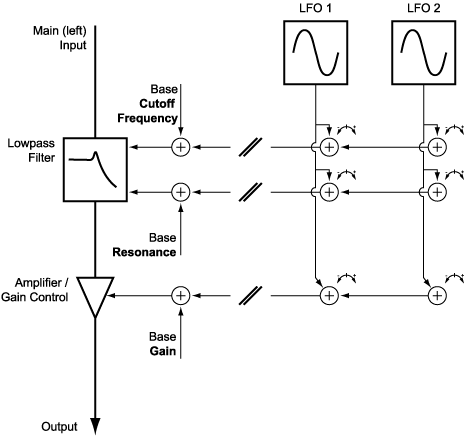 A diagram showing how modulation sources are mixed to control each parameter, using LFOs 1 & 2 as examples. The circles with + signs in them indicate summing junctions.

The diagram shows that each basic parameter is controlled by the sum of its Base value and each of the modulation sources (only LFOs 1 & 2 are shown). Each modulation source is added or subtracted based on the position of the corresponding knob on the modulation mixer. To make it clear how the diagram above relates to the SouthPole user interface I've put them both side by side below, with an arrow indicating how each knob relates to the base parameter values and modulation mixing levels in the diagram.

Before we get to the modulation mixing examples I'd better give a little bit of an overview of SouthPole's LFOs...

A brief sidebar about SouthPole's LFOs

As the name suggests, a Low Frequency Oscillator (LFO) oscillates slowly — typically slower than the speed we usually associate with “audio frequencies” i.e. slower than 20 cycles per second... often much slower. Thus they're useful for creating rhythmical or slowly modulating changes to the filter settings. The SouthPole contraption has two identical LFOs. Each has two basic modes: Clock Synchronous and Asynchronous. The clock synchronous mode allows you to create LFOs that stay in time with the beat (cycling every 8 bars for example) while the asynchronous mode is the more traditional free-running type oscillation where you can control the oscillation rate with a knob. There are various LFO waveforms, including a random mode which steps between random values similar to a "sample-and-hold" circuit in an analog sythesizer. When set with a clock-synchronous rate, a random LFO can be handy for randomising the filter settings or amplitudes of each note as I'll show in the final example below.

One important thing to note about all of the LFO waveforms is that they are positive DC waveforms, which means they swing from zero to one (unlike audio waveforms which alternate between negative and positive values), this makes it easy to use them with SouthPole's additive modulation mixing system: adding a sine wave LFO to the Base value causes the parameter to sweep from the Base value to a higher (or lower) value determined by the level set by the LFO's modulation mixer knob.

So, the modulation mixing knobs on SouthPole let us add and subtract modulation sources to the base parameter values. Let's step through some simple examples. As in my last post we'll filter the output of an Arpeggiator.

Adding and subtracting a single LFO

Here's the sound filtered with a lowpass filter, filter cutoff frequency is set to 300Hz, with no modulation. I've shown the corresponding SouthPole modulation mixer settings in the screenshot that follows the sound player:

The same sound with a slowly varying sine wave LFO modulating filter cutoff, mixed in at +0.04:

The same sound with a slowly varying sine wave LFO modulating filter cutoff, mixed in at -0.04:

Notice that in both of the previous examples I didn't change the filter cutoff Base value. With the LFO modulation amount set to +0.04 the filter sweeps upwards from the base value, with it set to -0.04 it sweeps downwards below the base value. Actually the downward sweeping example sweeps so low it filters out the input signal entirely, giving the effect of the whole sound fading in and out. It's worth starting with this setup and experimenting with how changing the LFO modulation amount changes the sound.

All those knobs on the SouthPole modulation mixer are there for a reason – they allow you to mix more than one modulation source together at the same time. In this example I'm going to mix a sine wave LFO and a square wave LFO. LFO 1 is the sine wave LFO, oscillating slowly as in the previous examples. LFO 2 is a faster square wave LFO which gives a rhythmic pulsing effect.

Once again here's the filtered sound with just the sine wave LFO (LFO 1) modulating the cutoff frequency downwards from the base value:

Now the filtered sound with a moderate speed square wave LFO (LFO 2) modulating filter cutoff frequency above the base value:

Each modulation source can control more than one parameter. Here's an example using both a sawtooth (ramp-down) LFO (LFO 1) and a random LFO (LFO 2) to modulate all three parameters (filter cutoff, resonance and gain). The sawtooth LFO modulates the Gain to give the effect of a repeated decaying envelope. I've set both LFOs to be clock-synchronous with a quarter-note period, which locks the LFOs together creating the effect of a stream of randomly modulated notes.

The attacks are clicky due to the instant rise time of the sawtooth LFO. Usually you'd use an envelope generator to create a slightly slower attack – I'll do that in the next installment when I'll explain SouthPole's ADSR envelope generators.

In this post I've shown how to mix multiple modulation sources together to give more complex control over SouthPole's filter parameters. Keep in mind that the sounds presented here are the result of only one set of modulation mixing settings. Turning the knobs a bit can give quite different sonic results, as can choosing a different sound to feed through the filter. For example, you could try playing your favourite sound file through SouthPole with the settings I used today.

You can download the AudioMulch document for this post here. You'll find all the examples set up as SouthPole presets. Remember to press the play button so that the examples using clock synchronous LFOs work properly.

Thanks for reading. If you have any questions please feel free to ask in the new AudioMulch forums! Until next time -- Happy Mulching!