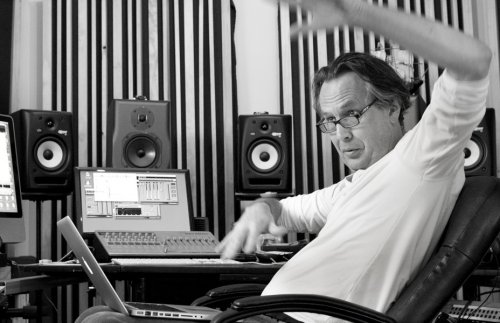 Peter Kennard's eclectic musical career spans more than twenty years. He is a percussionist, a composer, and writes and directs music for theatre, dance, film, and large-scale public events. He also works in the studio, as a performer, producer and mixer.

Video of Theatre of Image's SNOW on MARS, music by Peter Kennard.

Peter Kennard uses AudioMulch to respond to the multi-faceted musical and technical challenges of theatre music production. These challenges include being a “sound operator, live musician, composer and sound designer; all in one”. He uses AudioMulch to both process sound and to mix and route signals through complex, multi-channel surround sound speaker setups. In this video, Peter describes how he puts AudioMulch to practical use in his theatre work: as a mixer, live signal router and sound spatialization tool. He also briefly demonstrates his use of AudioMulch to process the voices of actors in real time, using an example from a recent theatre production.

New South Wales-based Peter Kennard has had a varied musical career spanning more than twenty years. He is a successful percussionist, a composer, a producer, and writes and directs music for theatre productions. Companies he has worked with include Sydney's Legs on the Wall, Theatre of Image and Q Theatre, and outside Australia, the State Theatre of Turkey. His most recent studio outing was performing, mixing and producing songwriter Fred Smith's critically acclaimed album "Dust of Uruzgan," songs about the war in Afghanistan. Peter has also composed for dance productions and film, and large-scale public events, including the New Year's Eve Fireworks at Darling Harbour.

I went and found AudioMulch to satisfy a whole lot of needs over here. And lo and behold, kind of counter-intuitively, I found that it serviced a whole lot of other stuff that was really useful for me in a theatre context.

What’s happening in a lot of theatre these days, are the sound design possibilities in live performance and theatre are actually expanding hugely. I’d say that whole aspect of performance is really re-inventing itself quite amazingly.

When I work in these situations I find that I’m usually the sound operator, the live musician, the composer, the sound designer, all in one. What I discovered with AudioMulch is that not only could I use it as a fantastic live signal processor, and develop all sorts of interesting sound designs from my performance, I could also plug in actors and start messing around and having fun with their words as well. More than that, when I’m on stage performing I can’t be up at the front of house mixing desk mixing this. Perhaps there’s a way... "Ahh look! Here it is". AudioMulch actually allows me to do all of my speaker management and so much of my mixing for all my audio playback can be done from my position on stage.

Here’s a patch - I hope you can all read that - that I used in the recent Q theatre show [refers to screencast]. It’s almost left brain/right brain really. All of this part of the world...you see Ant, Marko and Shari, the names of my three actors [identifying particular input contraptions in the Patcher Pane]...I was able to route their voices through a whole series of wonderful AudioMulch kind of processing. But over on this side, that’s the kind of interesting part for me. Basically, it’s a series of mixers, cross-faders, EQs, dynamics processors - all sorts of things are possible here. What it enabled me to do from my position on stage was to manage all of my audio playback.

For me, I’m starting to use AudioMulch like a travelling hand-luggage audio solution. I can travel anywhere, because I tour a lot of my shows. I find that I can walk into just about any venue and use whatever facilities they’ve got and adapt my sound design very, very quickly on the fly by adding whatever modules or subtracting or re-routing. Doing all of my signal routing in my computer. All I need is just my outputs, such as Donna’s little MOTU here, a mixer and a sound system.

All the homework and all the operation and all the dynamic mixing for my live theatre playback actually happens here in AudioMulch. It’s kind of counter-intuitive... Ross talks about, "on-the-fly, improvisational, immediate" and here am I using AudioMulch to actually nail things down in very predictable and highly repeatable, tight little sequences guaranteeing each performance. I can do complex mixer moves, sending sounds, starting from certain origins and departing into various speakers and coming back again. All sorts of wonderful, dynamic moves with sound throughout the auditorium in multi-speaker systems.

I had three actors on stage and they were working through and reciting a series of Australian poets. Very simple really. I actually started just using loopers, catching, morphing and crunching up their dialogue live.

The audience ended up becoming enveloped by a whole lot of rippling voices all generated from the actors onstage live...and then you’ll see what happens at the end.

[Plays a section of the recorded performance]

...and that’s how we segued into the next scene in the theatre show. Endless possibilities.

I really urge you guys to have a look at this. Not from the point of view of just generating electronic music, but from the point of view of actually manipulating a whole lot of live mixing duties. It might seem a little mundane compared to some of the more interesting experimental electronic stuff you could do with this, but I tell you what, it gives you an extra pair of hands in performance. It’s fantastic!

Recorded at Integrate 2010, Sydney, Australia. Thanks to Andy Stewart and everyone at AT World. Filmed and edited by Jessica Tyrrell.